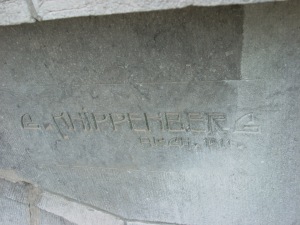 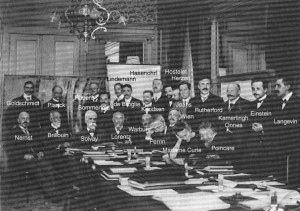 The First Solvay Conference, convened in Bruxelles in 1911, can be considered to be a collection of the founders of special relativity The photo credit is Photo Couprie, Bruxelles.

In this post I am including the signatures of two architects: G. Knippenberg and Joseph Prunelle. They have both in common the fact that they built houses in the decades of the 1910’s and the 1930’s. I will come back in a later post (on the 1930’s) on these two architects.

The 1911 signature of G. Knippenberg corresponds a house in Rue Hector Denis 5 in Ixelles (Brussels). I took a picture of the house. The reader will notice that there is a building next to this house. Well, it was designed by the same architect, but… twenty years later in 1931!

To answer this question I had a quick look at Wikipedia. Here are some of my findings:

In the course of 1911 the Belgian State concludes a contract with the British company Lever to create the HCB (Huileries the Belgian Congo). It provides for the concession of 750 000 ha of land to exploit the oil palm. In 1930 the HCB handles 96,900 tons of fruit and will export 18,000 tons of oil and 10,300 tons of almonds. From “Histoire générale du Congo: de l’héritage ancien à la République Démocratique”, by Isidore Ndaywel è Nziem, Théophile Obenga, Pierre Salmon.

On 21 October  Charles I of Austria marries Princes Zita of Parma. They will reign from 1916 to 1918. He was solemnly declared “Blessed” on 3 October 2004 by Pope John Paul II.  In the Brussel’s Church “Notre Dame du Sablon” there is a relic of Charles I.

The First Solvay Physics Conference takes place f’rom 30 October till 3 November in Brussels, in the Hotel Metropole. Marie Curie is one of the scientist invited to by Mr Solvay to participate in the meeting. (see picture).

On 13 April the starts the Mexican Revolution and on 14 December Roald Amundsen‘s expedition reaches the South Pole. Note that Admundsen was one of the crew members of the famous Belgica expedition to the Antarctica.